Internet Explorer 8 or 9 is not supported by this website. Please use a more up to date browser.


An email will be sent to your email address. If you don’t receive an email shortly, please check the email address and try again or contact your local Sales & Service Center. Close
Forgot username/password

The following languages are fully supported on our offering of international sites, including detailed product information and e-commerce functionality.

Additional regional languages may be available on your local Swagelok Sales and Service Center's websites.

For additional assistance, please contact your local Swagelok Distributor at +43-2236-677079.

Founded 2010 by a few students from TU Wien, the TU Wien Space Team has the aim to design and engineer rockets, rocket engines, satellites and airplanes. The team nowadays counts more than 100 active members, mainly students, but they are open for anybody who is interested in aerospace engineering. In 2010, the team started with solid fuel rockets and over the years continuously improved them, so the "Space Team Rocket" (STR) is already in its 10th generation.

In addition the Space Team built "The Hound", a two stage solid fuel rocket currently in its 3rd generation. With "The Hound" they plan to reach an altitude of over 100km as a final goal and as an intermediate one, they aim to beat the european record of the highest altitude, which stands at 32.3 km.

It is worth mentioning that the Space Team also explores space near earth with CubeSats and the the atmosphere with aviation projects.

The tiny satellites - CubeSats - are developed to fly above earth and collect data with a specific experimental setup. "Pegasus" was brought to its orbit in 2017 and delivers data continuously since then. A second CubeSat project is currently under development, the "SpaceTeamSat1".

The projects "Deadalus" and "Across Austria" are the aviation projects, the first demonstrated an alternative recovery system to parachutes for atmospheric reentry and landing, whereas the latter will launch an autonomous flying drone and equip it with a hydrogen fueled propulsion system.

Back to rockets… with the gained knowledge from the previous years and the growing number of members, the team decided to tackle a new challenge: With the project team of "Houbolt", a liquid fueled rocket will be built to reach space (altitude: min. 100 km).

This means for the team to not only build a new airframe, but a new propulsion system from scratch, with all its "surprises" and pitfalls. Therefore, the Space Team decided to keep the target (reaching space) in mind, but to begin with a rocket slightly smaller,"µHoubolt".

However, a new implication comes along with that, while the project progresses. For the moment, the "Houbolt"-team works with the test stand "TS-02", which can handle up to 500 N of thrust and is regularly used for tests on the µHoubolt engine. The current test stand "TS-02" will not withstand the planned thrust of the liquid fueled engine of  "Houbolt" and does not fulfill the necessary safety requirements.

This will enable the team to develop and test the “Houbolt” engine thoroughly. The spaceteam is already familiar with the Swagelok system, having used it over the past years. It was a great pleasure to support them for their test stand "Franz", too. Besides training sessions for team members new to our products and systems, we are happy to send parts to the team in Vienna. On different locations on the test stand, fluids - in liquid and in gas phase - are needed. Therefore, the Swagelok systemsolutions was extensively used, we supplied them with valves, tubes and the fittings for connecting the parts.

As can be seen in the sketch below, the test stand has a rather complex fluid feed system, all of its components are highlighted for better visibility. 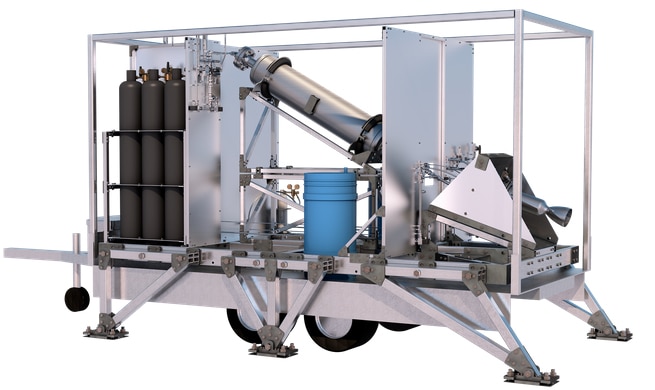 A crucial role plays the fluid distribution boards on the test stand, the parts mounted are necessary to execute an engine test under a controlled and precise environment with spot on dosing for the engine. In the two images below the Space Team shares the moment after mounting the Swagelok parts and before placing the boards on the test stand. Images of the main supply board, realized with Swagelok parts, right before being mounted on the test stand "Franz".  (Source: TU Wien Space Team)

At the moment of writing this blogpost, the boards are mounted and the work on the system is finished. This brings the spaceteam a huge step closer to the end of the building process and hopefully the first tests-runs can be performed in summer 2021.

We are happy to share an update on the progression of the test stand as soon as the Space Team switches from building to testing.

Explore other areospace projects that we and Swagelok Switzerland support with our know-how, products and solutions:

Do you have questions about the TU Vienna Space Team project or the Swagelok products used?